Why should we use our bikes for shopping? 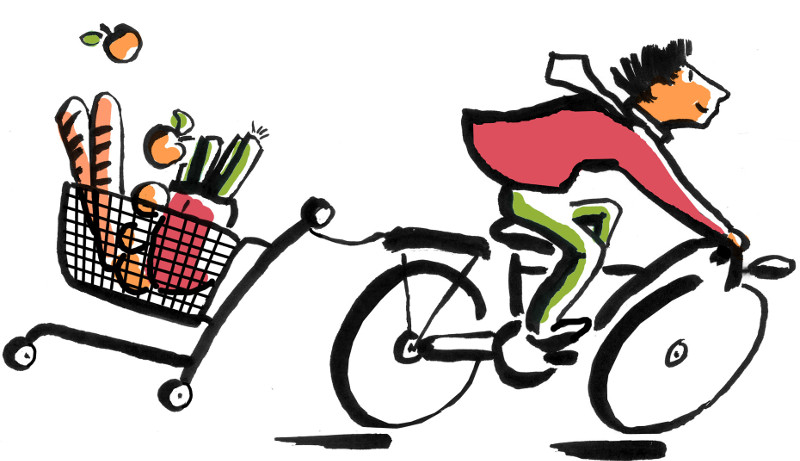 It's economical. Only walking is cheaper but it takes much longer. Use your bike and do not spend money fur fuel, parking fees, parking tickets, and repairs. Compared to your car the current costs incurring for the bike are very small.

It’s healthy. Instead of spending money in a fitness studio just do your daily shopping by bike – the health benefit may even be better.

It’s environmentally responsible. Cyclists do not pollute the air, they do not contribute to climate change, they do not waste energy, nor do they make noise.

How municipal administrations can support shopping by bike

Traffic: Space – as trivial as it may sound – is the most important factor for cyclists in shopping streets. This means more space for moving and more space for parking.

Bicyle lanes: On roads with an average level of motorised traffic cycle lanes should be installed. A cycle track on the sidewalk is not a good solution for streets with a high number of pedestrians since many conflicts are to be expected. Furthermore cyclists should better show themselves on the streets than to cycle on the sidewalk. Car drivers tend to overlook cyclists while turning off. Cycle lanes should have a minimum width of 1.50 meters.

Parking: Space is usually limited, it has to be used efficiently with the installation of bicycle racks. Well distributed parking possibilities for bikes avoid bottleneck situations. Depending on the width of the pavement, bicycle racks can be parallel, diagonal, or even vertical to the lane. If there are parking lots for cars, some of them should be converted to parking spaces for bicycles. Instead space for one car this gives room for about eight to ten bicycles.

How shopkeepers can support shopping by bike

Cyclists have the same preferences as car drivers. They feel like parking their vehicles as close to the stores as possible. Ideally parking positions are roofed over and well-lit.

Bicycle racks: Instead of using inappropriate racks many cyclists prefer to ignore racks. Installing "wheel benders" often turns out to be just a waste of space.

Service: Dealers could provide repair kit for flat tires and sell local cycling maps (or give them away).

Bonus program: Why not allow cycling customers a discount? Dealers should keep in mind that cyclists are an interesting target group: They prefer to visit smaller shops located in the centre of the town or district instead of shopping malls in suburban areas. Furthermore, car-parks are far more expensive than bicyle racks.

Baggage room: Not only cyclist appreciate some kind of box to leave bags for a while.